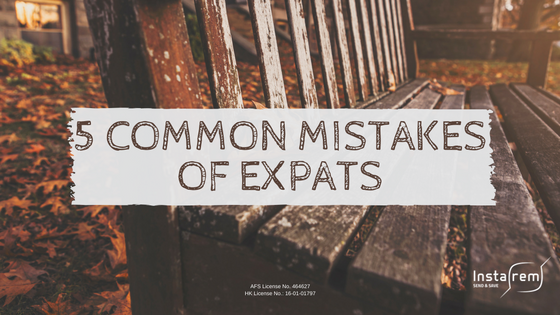 We often get thrilled whenever we hear stories of our friend or cousin who have now settled down in a foreign country. However what we don’t realize is the trouble they have to face in that transition process. In order to make the transition steps of expats smooth while relocating, InstaReM lists down the 5 common mistakes expats should avoid making:

The budget always matters when we plan to move out of our home country. Questions like how much it will cost for food and accommodation often come to the expatriate’s mind, and accordingly he/she frames the budget. However sometimes things do not work out as planned. Thus one should always have a good amount of money in another account which can be used during emergency.

This happens mainly in the underdeveloped or developing countries where people are always fantasized about a job in a more advanced country. They start looking out for opportunities irrespective of the job profiles they are working for in their home country just because they will earn handsome figures in the developed nation.

For example, someone who is working at a managerial position in a bank in his home country settles in for a sales associate job in a foreign country.

3. Not visiting the country before relocating:

Climatic conditions, culture followed and other such things needs to be taken into consideration while relocating to any country. One must visit the country and get feedback from the locals at least once before relocating there. This not only helps the expat to understand the country but one can easily judge in few days whether he/she would be able to survive in that country.

You might visit doctor’s clinic rarely but even if you fall ill once in a while, it could cost you a lot in some countries. The total spending per person in the UK was £2,350 in 2013: source. So to get a health insurance as soon as he/she relocates should be on top of the list for expats.

When you finally start working in the foreign country, you start sending money home to your loved ones so as to support them financially or for various reasons. Expats often opt for something which everybody in their network use to send money. One should always compare the cost of remittance and time taken to send money back home. Well if you are an expat living in Australia or Hong Kong, InstaReM can help you transfer money without any remittance fees and within 1 or 2 days.

We all make some mistakes in our lives that make us stronger and give motivation to do even better. Know someone who has never made a mistake? You must consider showing them this famous saying by Theodore Roosevelt:

Travelling Abroad? Avoid These 8 Mistakes To Save Money