Skip to content
Loading...
Latest posts
Making Card Payments To Suppliers Who Don’t Accept Credit Cards
Why Card-Based Lending Is More Favorable Than Business Loans For SMBs
Podcast: How Using Your Credit Card As A Tool For Cash Flow Can Help Your Business
Ensuring Security of Transactions In The Digital Era
How Digital Payments Can Help Companies Cope Post Pandemic

Despite the availability of much cheaper digital alternatives like InstaReM, consumers and enterprises continue to use big four banks, who seem to be consistently charging higher prices, finds ACCC

Sydney/Singapore, 5 September 2019: Consumers in Australia continue to use the Big Four banks for their FX Requirements and lose significantly in the process according to a recent finding of the Australian Competition & Consumer Commission (“ACCC”).

InstaReM, one of the world’s fastest-growing digital cross-border payment companies, has been identified as one of the most fair and cost-effective international money transfer (“IMT”) service providers in Australia according to the report published by the ACCC earlier this week.

As per the finding of the ACCC report, InstaReM is the most cost-effective IMT service provider in Australia for sending USD 200 overseas and the second-best for sending USD 7,000. However, despite the availability of much cheaper alternatives such as InstaReM, consumers continue to use the big four banks for their FX requirements, who seem to be consistently charging higher prices. As per the ACCC estimates, consumers who used the big four banks to send IMTs in USD and GBP during 2017–2018 could have collectively saved about AUD150 million if they had opted for the lowest-priced IMT service provider. 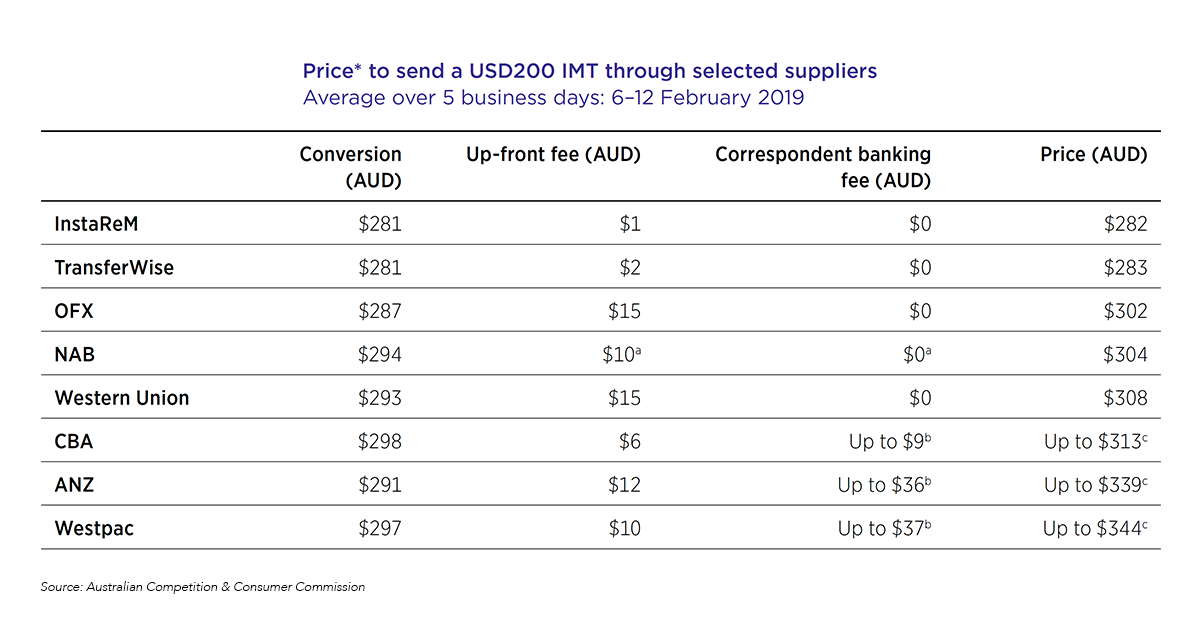 According to the World Bank, the average cost of sending remittances globally during Q2 of 2019 was 6.84% of the amount sent. Notably, the average cost of sending remittances from Australia was above the global average at 7.68% for the same period. According to the World Bank, Australians sent USD 16.89 billion in remittances to other countries during 2017, a significant amount of which went to Asia, Europe and the North America.

The ACCC report highlights how Australian consumers pay excessively for foreign currency conversion services primarily due to confusing pricing structures and a lack of consumer engagement with financial products which results in minimal research into alternative options. The total cost of FX services is driven by two components: the retail exchange rate (which includes a FX margin or mark-up) and a transaction fee. Banks and most IMT service providers either effect their charges on both or one of the components. But the users need to consider the total all-in cost. For instance, services advertised as ‘no fee’ can give the illusion that the all-in cost is lower than it actually is in reality.

“Banks do not always offer the best exchange rates and often work with several banks, to get your money across. This results in inefficient and costly cross-border money transfers. We also bypass the SWIFT network, which makes the transfers cost-effective and speedier for consumers. We only charge a small transfer fee – fair and transparent – that typically varies from 0.25-0.6% of the amount sent. GBP, EUR and USD are fast-growing segments for us and we are pleased at the number of new users switching to InstaReM for their transfer needs. Recently, we have bettered our pricing even for the USD 7,000 and above transfers, so as to continue to offer both businesses and individuals, the most cost-effective money transfer option.”

The final report is the outcome of the ACCC’s inquiry into why major companies in Australia, including the big four banks, have been consistently charging higher prices compared to their global peers.

With Australian origins, InstaReM is the only digital cross-border payments company with presence across Asia-Pacific, North America and Europe, covering 40+ countries. It has created a unique payments mesh which is being leveraged by individuals, SMEs and financial institutions to make fast, low-cost cross-border payments to more than 55 countries. InstaReM’s mission is to democratize money movements across the globe by developing innovative products that provide individual and enterprise users with seamless digital payments experiences. The company has significantly enhanced its payments capabilities in recent years by entering into strategic partnerships with global payment leaders such as Ripple, Visa and First Data. Since starting operations in 2015 in Australia, InstaReM has raised USD 65 million in funding. Its investors include Global Founders Capital, Vertex Ventures, Fullerton Financial Holdings, GSR Ventures, SBI-FMO Emerging Asia Financial Sector Fund, MDI Ventures, Beacon Venture Capital, Vertex Growth Fund and Atinum Investment.

A finalist at the FinTech Australia 2018 Finnie Awards, the RippleNet member InstaReM is the winner of the Blockchain Innovator Award from the enterprise blockchain leader Ripple for its innovations in the payments space.