Skip to content
Loading...
Latest posts
How To Set Up A Business Transaction?
The Now, The Next & The How: Coping Strategies For Small Businesses In A Post-COVID World
Why You Should Pay Your Suppliers On Time & How InstaReM BizPay Can Help You Meet This Goal
Making Card Payments To Suppliers Who Don’t Accept Credit Cards
Why Card-Based Lending Is More Favorable Than Business Loans For SMBs

Global financial markets have undergone a major transformation in the last couple of years and the biggest surprise of this transformation is a strong comeback of the US dollar. At the beginning of 2017, the dollar was trading weak and the analysts expected the weakness to continue through 2018. Twenty months later, the global financial markets appear much different. The most trending theme in financial markets in the recent months has been the strength of the dollar, and there are indications that its rise may continue – at least for a while. Reflecting the strength of the greenback, the US Dollar Index  (see image below), which tracks the value of the US Dollar against a basket of major currencies, jumped 5% this year, before shedding some of its gains last fortnight.

The US Dollar Index (YTD)

After remaining weak through 2017, the US dollar has made a strong comeback this year – largely on the back of a strong US economy and the protectionist policies of the Trump Administration. The strength of the greenback has, unfortunately, taken a toll on other global currencies. The Chinese Yuan is trading 10% off its high of the year, while the Brazilian Real is down 18.4%, the Russian Ruble is down 14.75%, the Pakistan Rupee is down 9.7% and the Indian Rupee is down 8.9% year-to-date (YTD) against the dollar (See Table: Leading Global Currencies Vis-a-Vis the US Dollar). The Turkish Lira and Argentinian Peso have been the biggest losers, both down close to 40% since the beginning of the year. Not only the Emerging Market (EM) currencies, the US dollar’s strength has also put pressure on the Developed Market currencies such as the Euro (down 3.45% YTD), Canadian Dollar (down 3.77% YTD), Pound Sterling (down 4.69% YTD) and the Australian Dollar (down 6.75% YTD).

Dramatic Meltdown of the Turkish Lira

The meltdown of the Turkish Lira against the US dollar has been much sharper than  other currencies. While Lira had been one of the worst-performing currency in the world this year following Turkey’s deteriorating economic fundamentals (High external debt of US$ 467 billion, which is more than 50% of its GDP, and high inflation of 15.9%). Once NATO allies, Turkey is currently at odds with the US over their conflicting interests in Syria, the US’ objections to Turkey’s plan to purchase Russian defence systems and an American pastor held by Turkey for two years on terror charges. Amid the ongoing confrontation, the Lira crashed by another 20% on 10 August after the Donald Trump administration doubled the tariffs on Steel and Aluminium from Turkey. Following the ensuing sell-off, the Lira touched a historic low of 6.95 against the US dollar on 13 August 2018 – halving from about 3.52 at the beginning of 2017. Lira’s continued depreciation against the US dollar makes it more expensive for it to service its dollar-denominated debt. This stoked fears that its troubles could spread to the other countries due to the exposure of global financial institutions to Turkey’s banking system. 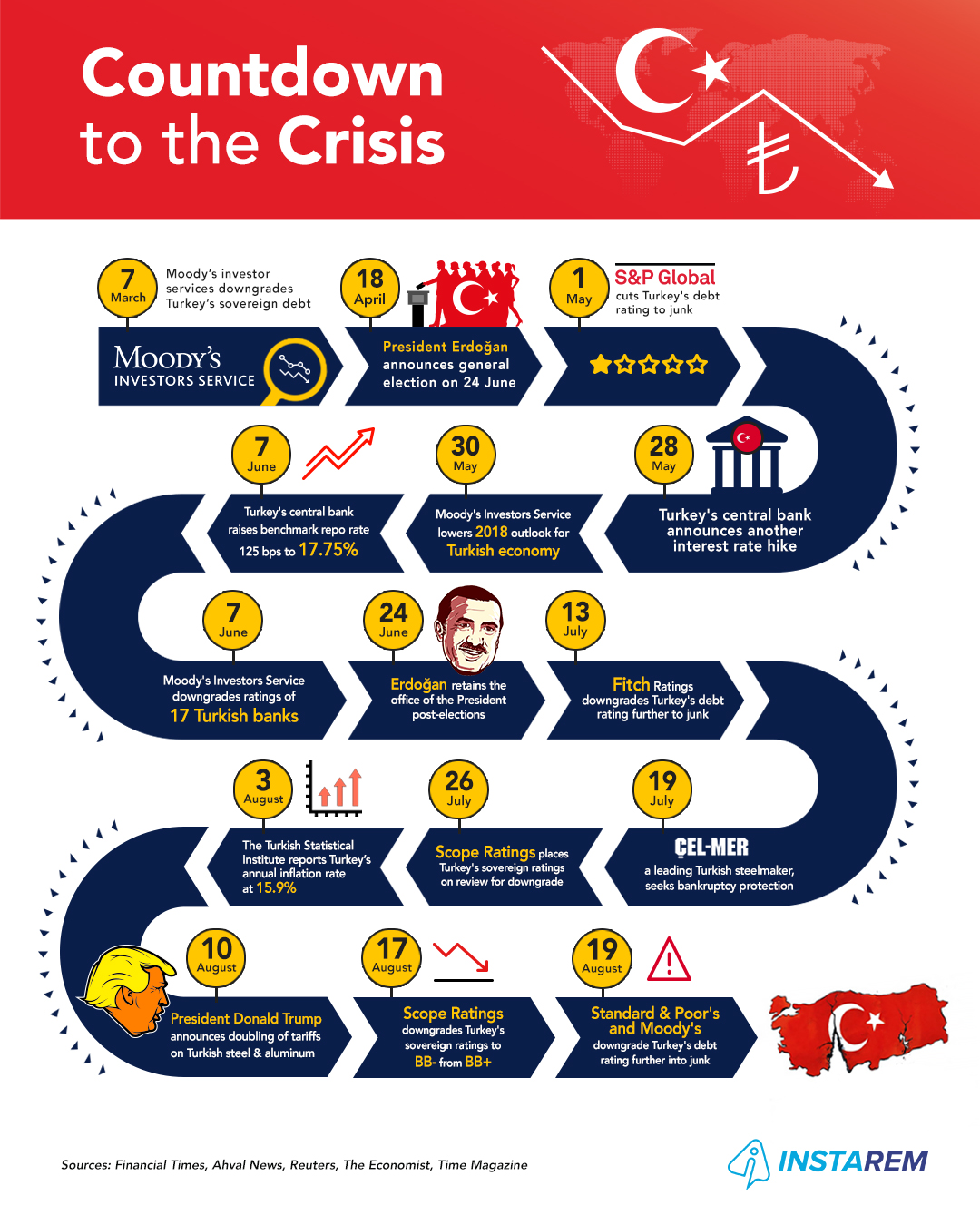 What’s in Store for Other Markets?

Will the US dollar continue to strengthen further? And what does this mean for other markets?

While some market watchers believe that the strong dollar may affect the Emerging Markets, especially those which maintain high dollar-denominated debts (see table: Leading Global Currencies Vis-a-Vis the US Dollar), another section of experts suggests that Turkey’s troubles are specific to the country and should not cause contagion effect in the region or the other Emerging Markets. In a recent note, the global rating agency Moody’s Investor Service opined that a correction in Turkish Lira highlights the external vulnerability and sensitivity to a rise in the cost of debt of some emerging and developing countries. (See table: Vulnerability to Costly Debts)

Countries with high current account deficits, high external debt repayments and very high foreign-currency government debt are most exposed to the impact of a stronger US dollar.

The strength of the dollar could be detrimental to economies with large trade deficits or massive foreign debts. The increase in the value of the dollar means an equivalent increase in the cost of servicing the dollar debt in the local currency, and this may undermine the global economic system, potentially causing defaults or even bankruptcies, causing serious damage to global economic growth. But in a connected world, which country can risk a slowdown? The answer is simply no one!

Slowdown in EMs Not Good for Developed Economies

The American CEOs, manufacturers and business groups fear that American growth may slow if the economies of its trading partners get jeopardized. Stock prices of British firms exposed to Turkey have already been affected. There are fears that some of the European Union banks could report significant losses on loans to Turkish businesses. Germany’s Chancellor Angela Merkel also expressed concerns that Turkey’s troubles could spread to the European Union, either by way of losses to some of the banks – especially Spanish and Italian – exposed to the bad loans from Turkey or from a possible rise in migration.

An eventual correction in the US dollar may provide some relief to the currencies of Emerging Markets. The Economist Intelligence Unit (EIU), the research and analysis wing of The Economist Group, expects the US economy to begin losing momentum around early-to-mid of 2019 following its escalating trade dispute with China, which may prompt the Federal Reserve – the US central bank – to take a cautious stance to deal with the threat of higher inflation. This, according to the EIU, may cause the dollar to correct against other currencies in 2019, and weaken further in 2020 as the economy slows and the Fed embarks on a policy-easing cycle.

Stay Alert to the Signs of Deterioration of Currencies

The Lira’s free fall has halted for now. Yet the crisis may have medium-to-long-term ramifications on global currency markets. A section of the market also believes that the strength could just be a temporary dollar frenzy, which may fizzle out eventually as the dollar moves into the overbought territory, and economies will find ways to deal with the strong US dollar. Unlike in the past, the Emerging Markets are not so vulnerable to a stronger dollar today. While the currencies of the developed economies such as Euro, Japanese Yen and the Swiss Franc are not so vulnerable, most EMs, even those without strong economic fundamentals, have an array of monetary tools to prevent them from meeting the fate of the Turkish Lira. Overall, the contagion risk is ruled out for now, as the Turkey crisis may be unique to its circumstances, although it is prudent to stay alert to the signs of deterioration in the currencies of the economies that are similar to Turkey. 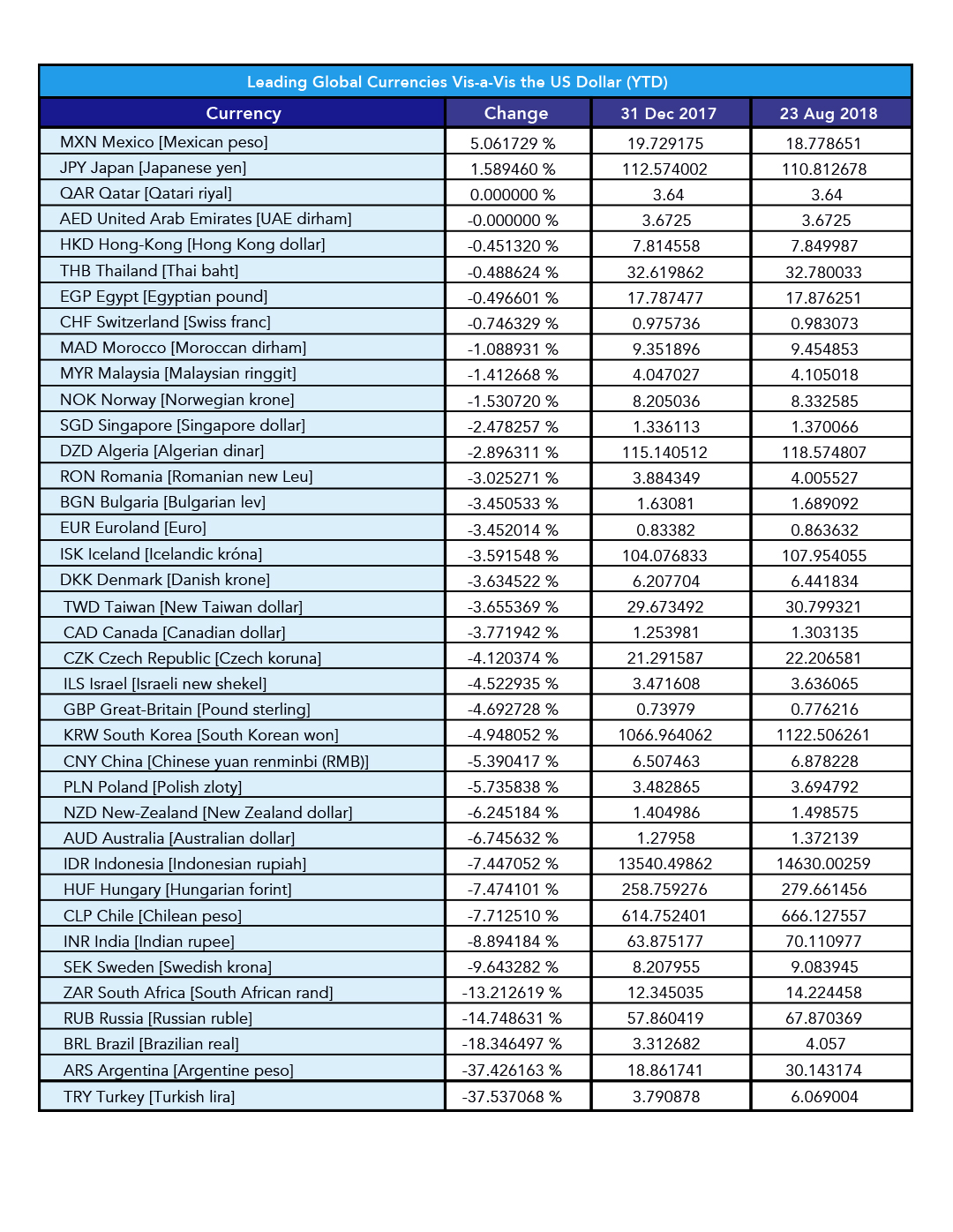