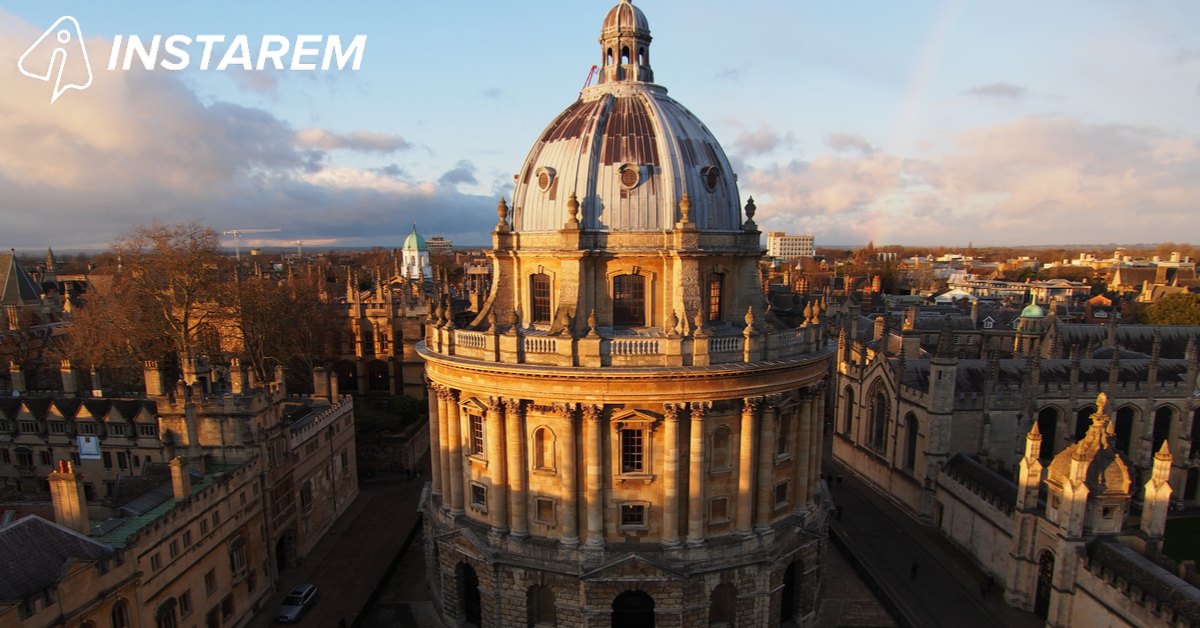 The land of gorgeous glacier-topped mountains and crystal-clear lakes, historic chateaus and charming chalets, aromatic wines and luscious fromage (cheese), there is more than one way to describe the gorgeous continental landmass that we know as Europe.

Thanks to its continent’s strong combined economy, fairly stable political environment (Brexit notwithstanding!) and excellent infrastructure, Europe is one of the world’s most liveable continents. Many European countries offer excellent opportunities for living, working and raising a family.

For students, particularly those aspiring to study abroad, Europe is a particularly attractive destination, thanks to its well-deserved reputation as a hub of academic excellence.

It is home to some of the world’s best and oldest universities, including:

But what makes Europe such a desirable destination for academic aspirants?

Why should you study in Europe?

Read on and we’ll tell you why!

1. A Wealth Of Educational Institutions To Choose From

With 50 countries spread across its land mass, Europe offers a whole host of choices if you’re looking for an excellent centre of learning and academia. Almost all European countries are open to welcoming international students.

A 2018 study by www.study.eu, an independent study choice portal for European universities, found that at least 10 European countries score very high on rankings for universities’ attractiveness to international students. The rankings measure universities’ strength on the basis of 3 pillars:

Overall, the study found that Germany is the most attractive study destination for international students, followed by the UK, France and the Netherlands. Switzerland, Sweden, Belgium and Italy are also among the Top 10 choices. 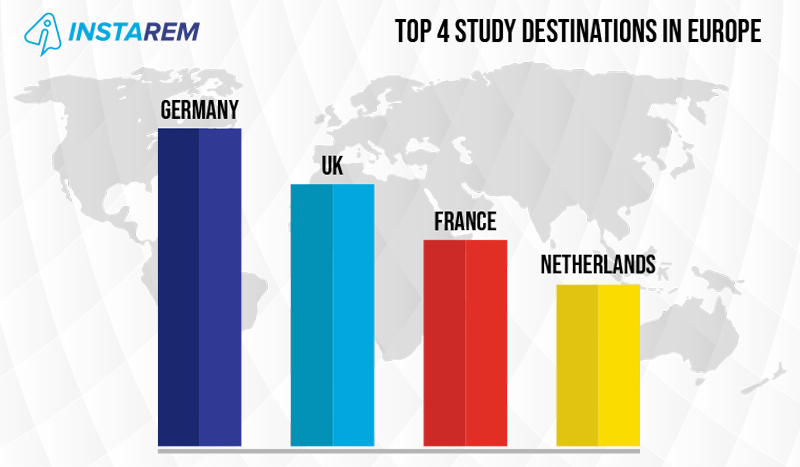 You Might Also Want To Read: 8 Top Reasons To Study In The UK

The study also found that international students more concerned about affordability have even more study choices in Europe. Poland, Serbia, Hungary, Romania, Turkey, Greece, Portugal, Lithuania and Latvia all score very highly on the Cost factor. Germany also features in the Top 10 with its universities providing an unbeatable combination of quality and affordability for study abroad aspirants (which is why it is #1 in Europe overall). International students studying in Europe can expect to incur annual expenses of between EUR 7,000 to around EUR 10,000, which makes studying in these countries much cheaper than studying at universities in the USA, New Zealand, Canada or Australia.

If the quality of education is your top-most priority, the UK is the clear winner, home to globally influential centres of learning as well as ‘university cities’ like Oxford, Cambridge, Edinburgh and Aberystwyth. Germany is a close second on the quality factor, with universities like Technische Universität München (TUM), Humboldt University of Berlin, Ludwig Maximilian University of Munich and Heidelberg University attracting a huge number of international students year on year. Unsurprisingly, universities in other Western European countries such as France, Netherlands, Sweden, Italy and Spain also offer the best quality of education within the continent.

When it comes to quality of life and career experiences beyond the classroom, UK universities take top honours. Ireland, home to Trinity College Dublin, University College Dublin (also known as ‘Ireland’s Global University’ due to its large international student populace) and National University of Ireland Galway, is a close second. Other good country choices for international students with respect to this factor are Iceland, Norway, Netherlands, Switzerland and Austria.

As already seen, European universities are very serious about the quality of education they offer. Overall, Europe boasts some of the strongest education systems in the entire world. In addition, the quality of teaching and learning are constantly monitored by the European Higher Education Area (EHEA) to ensure that excellent educational standards are maintained along with an impetus on continuous improvement.

According to the QS World University Rankings, an annual, highly-respected publication, 5 of the world’s Top 10 universities are in Europe. These are:

A number of universities also make it to the Top 100, including universities in France, Switzerland, Germany, Netherlands, Denmark, Russia and Sweden.

Europe has a rich history, dating back a number of centuries. Some of the world’s most important and far-reaching events took place in Europe. In fact, a number of ideas, theories, and concepts had their genesis in this ‘cradle of Western civilization’; not only in education and academia but also in other fields such as politics, philosophy, industry, literature, arts, fashion, economics, finance, sociology and anthropology. Many European cities such as London, Edinburgh, Paris, Berlin, Amsterdam, Copenhagen and Prague boast world-class architecture and compelling historical antecedents that make studying in these places a wonderful learning experience in and of itself.

In addition to having the best and most passionate educators, European universities also offer their students state-of-the-art technology, modern facilities, and research-or industry-oriented instruction. They provide access to comprehensive libraries that have extensive collections of books and multimedia to support students in their quest for knowledge.

In the broader world, Europe is also a hotbed of ICT and software innovation and development. Some of the world’s most valuable technology companies such as Spotify, Skype, Trivago, Supercell and SAP originated in Europe. In addition, European scientists are making great strides with their research endeavours in a wide range of fields from medicine to nanotechnology and space travel to polar research.

The 20-hour/week restriction holds true in Spain as well. In addition, students can only undertake work that is related to their programme of study.

In France, during term time, students can work part-time both on-campus and off-campus. Full-time work is allowed during scheduled vacations. Overall, students in France can work for up 964 hours during the year.

Students in Germany can work up to 120 days per year full-time or 240 days part-time. They can work for more than the allowable 120 days if they find a job with the institution of study.

Although English is widely spoken in Europe, there are more than 20 other languages that an international student can choose to learn, including French, German, Italian, Spanish and Polish. By learning a new language and through exposure to new cultural and social norms, you can expand your cultural horizons, become more independent and self-reliant and develop an invaluable ‘glocal’ mindset. Studying in Europe offers all these possibilities in spades!

Research has shown that travelling enhances creativity, improves mental health and enhances the feeling of life fulfilment. By travelling, students can learn new life skills, become more confident and open-minded and even enhance their university learning experience. Europe, in particular, offers a ton of opportunities to travel, even for budget travellers (also known as ‘students’!)

A student visa issued by many European countries (with some exceptions) entitles you to visit other countries within the Schengen area. And many countries use a single currency (Euro) so it’s possible to travel without constantly worrying about exchange rates.

Cheap inter- and intra-country bus services are available in many countries. These include the Megabus service in the UK and the Flixbus service that operates in 20 European countries. Europe has a very well-developed railway system as well. The Eurail Pass, a train ticket that allows you to travel in and through up to 28 European countries on trains and some ferries, is ideal for travellers looking to travel vast distances across Europe.

European degrees are respected by employers the world over. Studying in Europe does not just provide you with a world-class education. It also prepares you for a mobile, geography-agnostic global career.

In addition to European companies, many multinational companies have a presence in important European cities (London, Paris, Copenhagen, Berlin, etc). Thus, international students who study in Europe have access to a wide range of graduate job and career openings. By providing the opportunity to learn new languages and develop personal skills such as adaptability, self-reliance and cultural competence, a European education can be an important stepping-stone to finding that dream job.

Post-study employability for international students in Europe varies by country (differences in visa rules, job market, etc), university and programme of study. For example, the UK has a very competitive job market. However, it also offers a ‘post-study work stream’ via a number of work visas that allow UK graduates to work in the country, as long as certain conditions are satisfied. Similarly, Germany, Ireland, France, Switzerland and Sweden also offer conditional residence/workstream options for international students.

Overall, Europe has a number of universities that earn consistently high scores on employability rankings. According to the 2018 Global University Employability Ranking published by Times Higher Education, these include the University of Cambridge and University of Oxford (UK), Technical University of Munich (Germany), ETH Zurich (Switzerland) and HEC Paris (France).

So, if you’re considering studying abroad, Europe is a haven for endless possibilities and choices.

Offering quality, world-class education, state-of-the-art facilities and multiple opportunities for personal learning and development, European universities are among the best in the world.

8 Top Reasons To Study In The UK

Top 10 Reasons To Study In Malaysia

8 Reasons Why You Should Study In Singapore