Skip to content
Loading...
Latest posts
How To Set Up A Business Transaction?
The Now, The Next & The How: Coping Strategies For Small Businesses In A Post-COVID World
Why You Should Pay Your Suppliers On Time & How InstaReM BizPay Can Help You Meet This Goal
Making Card Payments To Suppliers Who Don’t Accept Credit Cards
Why Card-Based Lending Is More Favorable Than Business Loans For SMBs
Expat LifeInsider 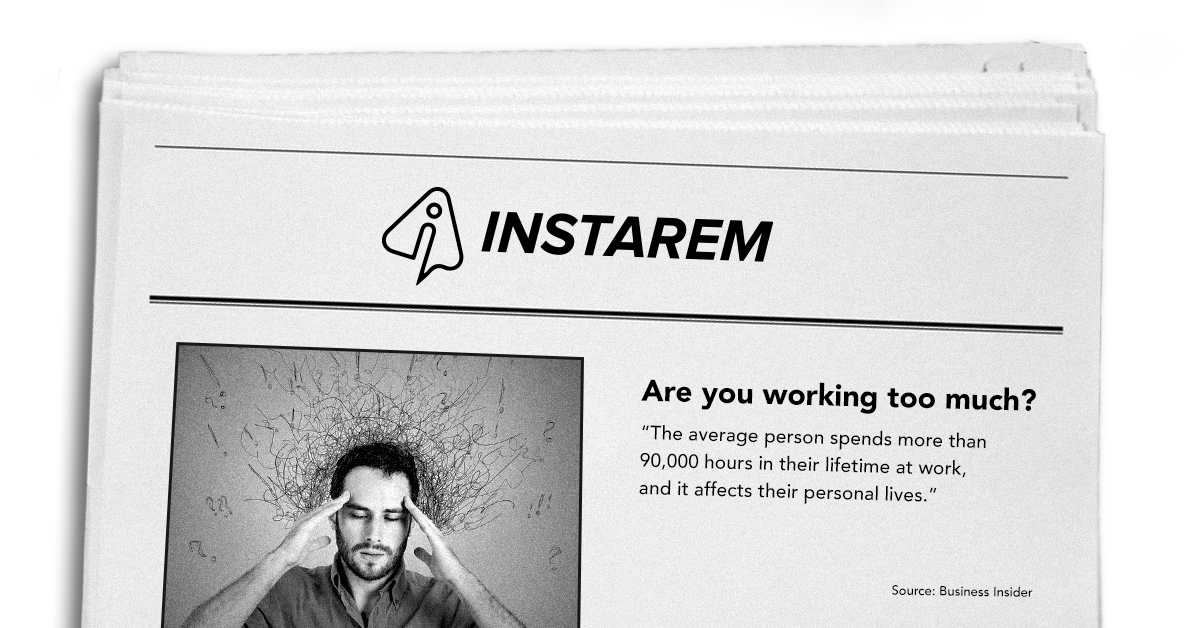 “On average, people now spend approximately 13 years and two months of their lives at work.”

“Most of the world’s population (58%) spends one-third of their adult life at work contributing actively to the development and well-being of themselves, their families and of society.”

– Article on the website of the World Health Organization

These are just TWO  of the millions of results we got in response to a Web search for the term ‘how much time do we spend at work?’

On a ‘macro’ level, the relationship between employment and economic growth may be a highly-debated issue among economists and policy-makers but it is also true that the former affects the latter in complex, multi-dimensional ways that just cannot be ignored.

So, regardless of nationality, gender, religion or socio-economic status, the world of work matters to everyone. However, not everyone agrees on ‘how much’ work matters. The number of hours a day a person devotes to their work differs from one country to another. To put this in another way, some countries have ‘long’ working hours while others have ‘short’ working hours.

A 2018 report from the Organisation for Economic Cooperation and Development (OECD), whose 36 members include many of the world’s most advanced countries (USA, UK, Australia, Germany, etc) but also some rapidly-developing and emerging nations (Chile, Turkey, Mexico, etc) found that in terms of hours worked, in 2017 Mexico had the longest work days, while Germany had the shortest.

But what do these words – long and short – really mean? The only way to understand the meaning of ‘long’ versus ‘short’ is to remember that these definitions are relative. In other words, a 40-45 hour (or even more) work-week may be considered ‘short’ in one country but it may be frowned upon and considered too ‘long’ in another country.

Going by this definition of ‘average annual hours worked’ in terms of hours/worker/year:

In 2017, the average Mexican spent a little over 2257 hours at work per year. This is the equivalent of over 43 hours per week (assuming he works all 52 weeks of the year).

In contrast, the average German spent only 1356 hours at work in a year, an equivalent of a 26-hour work week.

All OECD countries where the average work week is longer than this average are:

In Europe, Greeks put in the most hours at work, but their work weeks are still almost 7 hours – roughly a full work day – shorter than the work weeks of Mexican workers.

Workers in the Czech Republic and New Zealand enjoy shorter work weeks than 11 other countries in the OECD, but they still work slightly longer than the OECD average of 33.5 hours/week.

You Might Also Want To Read: 200 + Countries And Only 14 Ways To Charge your Phone Globally

In the OECD, only the 13 countries seen above have longer working hours than the OECD average.

The remaining 24 countries, however, enjoy shorter working hours; with the average annual hours worked per worker capped at approximately 1,740 hours or less.

These countries are (from longest hours to shortest):

In an average work year, German workers put in a whopping 901 hours (the equivalent of 17 weeks) less than their counterparts in Mexico. Like Germany, workers in Netherlands and 4 of the highly-developed Nordic countries of Iceland, Denmark, Norway and Sweden also enjoy short work weeks of 27-28 hours.

According to the OECD, the number of hours worked per person in a given country is defined by the following formula:

This definition determines which countries have long working hours and which ones have shorter working hours. This is also how OECD determined that Mexico had the longest work days among all the countries in the OECD group in 2017.

The OECD data covers both employed and self-employed workers.

What Makes Up Annual Working Hours

Why The Disparity In Working Hours Within The OECD?

Socio-economic, historical and cultural factors play an important role in determining how many hours the workers in a particular country work during an average week.

In Mexico, long-standing fears about unemployment, rising inflation and slowing economic growth means that people work longer hours per week. At the other end of the spectrum, German workers put in fewer hours at work and enjoy a better work-life balance thanks to a culture that gives importance to leisure as well as work. Also, because they live in an advanced, highly industrialised economy – Europe’s largest and strongest – they don’t feel the same desperation to work longer hours in order to increase their income. Despite the shorter working hours, however, German workers are among the most productive in the world, ahead of workers in the UK (who are 27% less productive than the Germans, according to a 2017 report by the UK’s Independent newspaper), France and even the US.

Workers in the rich European countries of Netherlands, Sweden, Austria and Iceland also work fewer than 1500 hours per year on average, over 200 hours (approximately 5.5 weeks) fewer hours than the OECD average. According to the OECD 2017 Better Life Report, workers in Denmark enjoy the best work-life balance in the world. In addition, the percentage of Danish employees who regularly work ‘very long hours’ has steadily declined since 2008 to only 2%, compared to the overall OECD average of 13%.

In 2017, the developed nation with the longest working hours was South Korea. In fact, work weeks in this country were longer than in any other OECD country except Mexico and Costa Rica, mainly due to official efforts to boost economic growth. However, long work hours have also fuelled concerns about social problems such as falling birth rates and slowing productivity. To address these concerns as well as changing societal attitudes towards work, South Korea’s National Assembly passed a law in March 2018 to slash working hours (capping the maximum allowed from 68 hours/week to 52 hours/week) and give its workers the ‘right to rest’. This may be why the average annual hours worked by South Korean workers fell from 2,084 hours in 2015 to 2,071 hours in 2016 and finally to 2,024 hours in 2017.

Japan, another developed country in the OECD, has for years been associated with a workaholic culture that spawned the term karoshi (death by overwork). Japan’s culture of working long hours was formed during the boom times of the 1960s-1990s, when people who worked overtime were valued and therefore enjoyed greater career success.

However, the rising number of karoshi cases has fuelled a demand for reforming labour laws, improving working conditions and of course reducing the work hours across the Japanese workforce. This may be why the OECD report found that in 2017, the average Japanese worker worked only about 1,710 hours per year (a 33-hour work week), a figure that is below the OECD average of 1,744 hours. The 2017 figure is the lowest for Japan in 4 years, falling from 1,729 in 2014 to 1,719 in 2015 and 1,714 in 2016.

What About Countries Outside The OECD?

The OECD is a group of only 36 out of the almost 200 countries in the world today. Therefore, OECD’s report does not provide any information about the working hours in non-OECD countries.

In Asia, more people work the longest hours. Many countries have no universal national limit for maximum weekly working hours and some have thresholds as high as 60 weekly hours or more in most developed countries. According to a BBC report, since May 2018, only 4% of Asian countries have been abiding by the ILO’s international labour standards on working time, some of which have been in place since 1919 and have set the maximum threshold of 48 hours for the working week. Many countries such as India also do not have a legally-guaranteed minimum amount of annual leave, a factor that affects the average annual hours worked by people in the workforce.

According to a 2016 analysis of 71-cities by Swiss bank UBS, workers in several Asian cities were found working longer hours.

Asian Cities To Feature In The Top 10

Hong Kong also holds the dubious distinction of being the world’s stingiest city with regards to annual leave offered to its workers: 17.2 days/year, compared to the global average of 23 days.

The BBC report mentioned earlier also found that 34% of countries in the Americas and the Caribbean have no universal weekly hours limit. In the Middle East, long hours are legally allowed, with eight out of 10 countries permitting workers to put in over 60 hours per week.

These figures are in stark contrast to Europe, where most countries have legally stipulated that a work week be capped at 48 hours. In some European countries such as Belgium, although the legal working week is capped at 38 hours, companies are allowed to alter working hours in line with their particular requirements, as long as workers are appropriately remunerated for overtime.

Finally, the report found that Africa has the largest number of countries in which more than one-third of the labour force works over 48 hours per week.

In general, according to visualisations prepared by Our World in Data:

A country’s GDP per capita is inversely proportional to the number of hours worked. In other words, people in richer countries work less. For example, in 1990, workers in Brazil worked an average of 1,879 hours/year. As the country has developed economically, this number has fallen, with Brazilians workers putting in only 1,711 hours/year (33 hours/week) in 2014.

A country’s productivity is also inversely proportional to the annual number of hours put in by its workers. Again using Brazil as an example: in 1950, each worker worked an average of 2,042 hours/year while the country’s productivity (GDP per hour worked) was a meagre USD 2.12 (2011 terms). In 2014, workers worked only 1,711 hours but their productivity was equivalent to USD 16.84.

The length of the average working week (and year) varies depending from one country to another. While workers in some countries are burning the midnight oil, others are enjoying excellent work-life balance. A number of factors determine the extent of these disparities. They also determine why these disparities exist in the first place.

In general, workers in rich, developed nations tend to have shorter working hours. They also enjoy other perks such as guaranteed annual leave, maternity/paternity leave and of course, better working conditions. By contrast, workers in low and middle-income countries in Asia, Africa and the Americas not only work longer hours, but also also suffer from lower pay, greater job insecurity (greater unemployment rates), ‘working poverty’ (poverty despite regular employment) and have fewer guaranteed leaves.

How To Be Prepared For A Layoff While Working Abroad

10 Things You Must Know About Working Holiday Visas